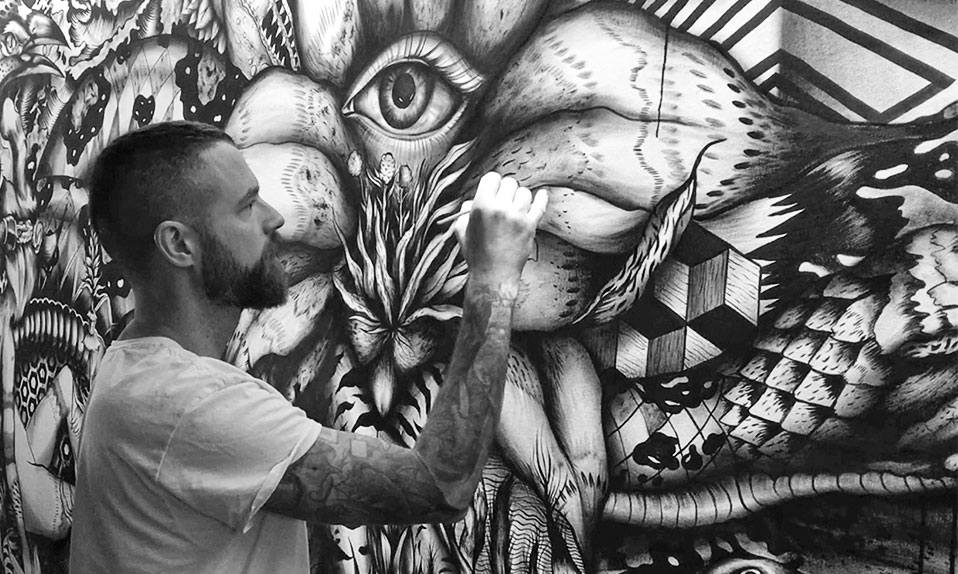 // I’m not gonna go for a walk in the woods with a map and a kompis I would rather just head in and get a bit lost and try to find my way out. And I think I do the same thing with my art. //

And it’s easy to get lost in Peter John de Villiers’ artwork – also known as The Shallow Tree. Uncommon areas, from snowboards, over skulls, guitars, shoes (for Vans) up to large walls like recently in the Mandrake Hotel (UK), are his favourite canvases, that he fills over and over with mostly black and white drawings in a very detailed way. Mystic figures, animals, flowers, signs and patterns – there is so much to discover that you hardly find your way out of it again.

Peter John de Villiers – actually born in South Africa, but now living in Norway – is one of my favourite and most inspiring Nordic artists. Have a look at his outstanding work and watch the short documentary video at the end: Getting lost in the woods, picture taken by Aaron Schwartz, 2017

A little documentary: “Get Lost” by Sindre Habberstad and Christoffer Pedersen: